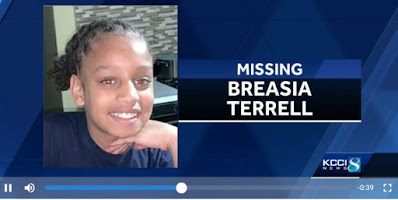 Davenport police Chief Paul Sikorski made the announcement during a news conference. Terrell’s body was discovered in a pond in a rural area near DeWitt, about 20 miles north of Davenport. Authorities have been investigating the disappearance of the 11-year-old girl since last summer.

On July 9, Breasia spent the night with her brother Detorious, whose father is Henry Dinkins. Dinkins is the person of interest in her disappearance.

Dinkins, now in custody and awaiting trial for an unrelated charge, remains a person of interest in the disappearance.

“They know he knows something but he’s not talking,” said Breasia’s uncle DeMarcus Lankford. “That’s basically all we hear.”

The FBI is offering a $10,000 reward for information that leads to Breasia or the arrest of anyone involved in her disappearance.